A tad north of Gympie and just around the corner from Rainbow Beach sits Tin Can Bay.

This seaside town has attracted travellers to its shores for years. The combination of a beautiful outlook and a couple of unbelievable experiences makes it a popular spot.

…and with Fraser right at its doorstep, Tin Can Bay often plays host to a raft of anglers, hoping to hook into a few A-grade Queensland species.

Launching from Tin Can Bay Marina makes accessing these waters incredibly easy. Dave and the team have loads of space to park up the pride and joy, plus if you book one of their villas on the marina, you get a free 10m berth for the boat. Pretty good if you ask us.

From there, it’s just a short run to the bar, which once that is navigated, there are marks galore. Those in the know will often keep these two themselves (classic fishermen), but there is plenty of rubble in water ranging from 60 metres, coming all the way into more shallower stuff at 20-30 metres.

IF you nab the tide change, there are plenty of big Snapper to be caught. Dawn and dusk are the prime bite times for these awesome fish. A tip – the boys used float lines to entice the better bites. In simple, letting an unweighted pilchard waft its way down the water column. The Snapper can’t resist. You can leave a reel on the free spool for this, otherwise, a Baitrunner will do the job nicely.

If you’re on the lookout for bigger, harder pulling fish, then a few spots off the tip of Fraser Island might be of interest. Renowned as a mecca for big Red Emperor, there a few spots in roughly 60 metres of water that you’re a chance of landing this bucket list species. The boys had a bit of luck on their trip thanks to some gear from Daiwa.

Recommended at least 80-pound braid and equal to heavier weight leader. You don’t want to lose your fish of a lifetime!

The waters around Fraser Island represent some of the best fishing South East Queensland has to offer, so why wouldn’t you give it a crack when it’s so close to home! Treat yourself to a trip, you won’t regret it. The lifestyle that comes with being a Yachtshare owner 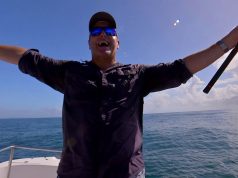 Talk about ‘ticking all the boxes’ – Welcome to the Macleay... 4WDing
If you’re reading this, you’ve probably watched our latest show and now you’re champing at the bit to explore the Macleay Valley Coast in New South Wales. The area is a paradise for Creek-to-Coasters! At your fingertips...

How to treat a jellyfish sting Creek To Coast
There are plenty of myths when it comes to how to best deal with jellyfish bites. To separate truth from fiction, a great place to...

Sauces for a Cold Seafood Platter